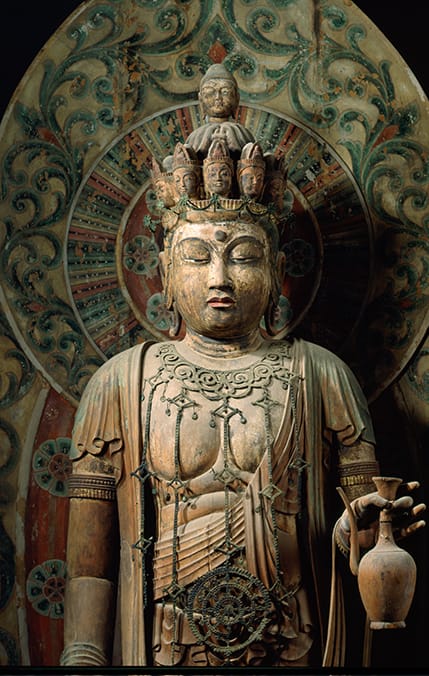 Surrounded by a resplendent halo painted detailed arabesque and floral embellishments, this statue of the Bodhisattva Kannon (Avalokita-svara) is an exquisite example of Buddhist sculptor’s craftmanship in the ninth century (Heian period 794-1185). It stands 196.2 centimeters tall and was carved from a single block of Japanese nutmeg(kaya) wood. Eleven faces (Ekādaśa-mukha: eleven faces) mean that all in times Kannon watches people of ten directions world. It has twelve faces in fact. The main head face looks beautiful and feminine. But ten bodhisattva heads around the main head have three each gentle, angry, menacing faces and one loud laugh face. And the top face is Buddha (Tathāgata). It has a water pitcher instead of a lotus flower vase on the left hand. This style is unusual. It means that Murou has been the sacred place of water. As the bodhisattva of affection and compassion, Kannon is believed to save people from every pain and to supply things that they want. The statue is housed in the Treasure Hall from March 2020.

Located at the foot of Mount Murou,Murouji is the head temple of the Murouji sect of Shingon Buddhism. This area had been regarded as a sacred location since ancient times, people worshipped the Dragon God (Nāga: a god of water), said to live in a cave on the Mount Murou. In times of drought the Emperor of time would send messengers to pray to the Dragon God for rain.

The temple’s official history began in the late seventh century, by Imperial order of the Emperor Tenmu (reign 673-686), En no Gyoujya (Ozunu) established the temple. And in the late eighth century, the Emperor Kanmu (reign 781-806) ordered a high priest Kenkei of Kofukuji to begin to rebuild the temple, but soon he died (793). So that his disciple Syuen took over Kenkei’s duties, he built a holl and a pagoda. After that Shintai of Kukai’s disciple entered the temple with Shingon Esoteric Buddhism. And in Kamakura period, the main Kanjyodo Hall (1308) and Miedo Hall which enshrines Kukai were built. 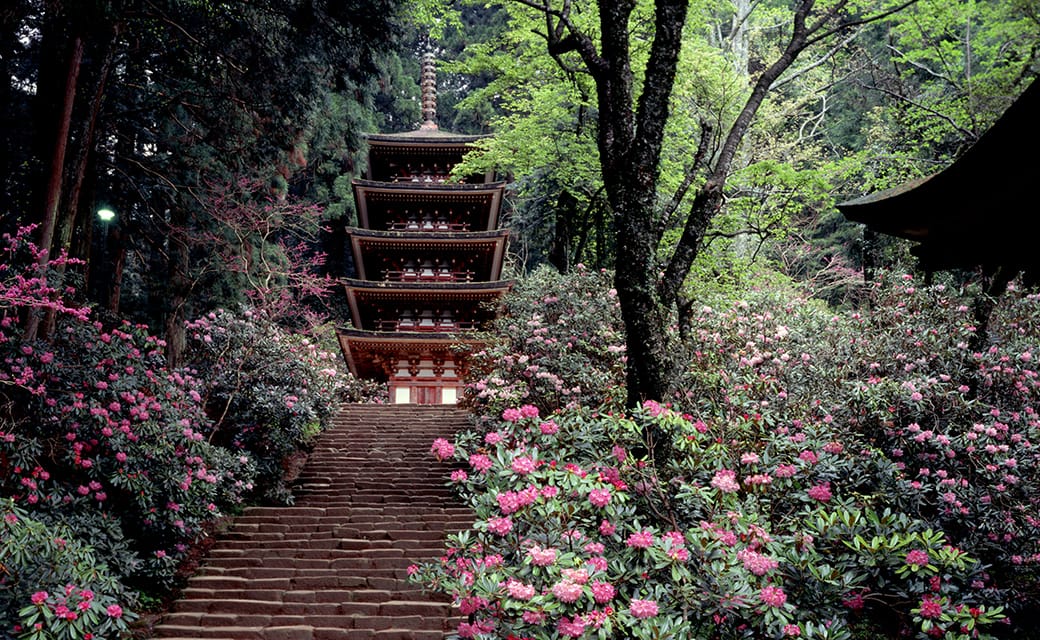 Murouji Temple is celebrated as one of places of worship for women. In contrast to Mt.Koya(Wakayama Prefecture) which to prohibited women until Meiji 38(1905), Murouji allowed women to visit, so it was called ‘Nyonin Koya’ which means Koya for women. 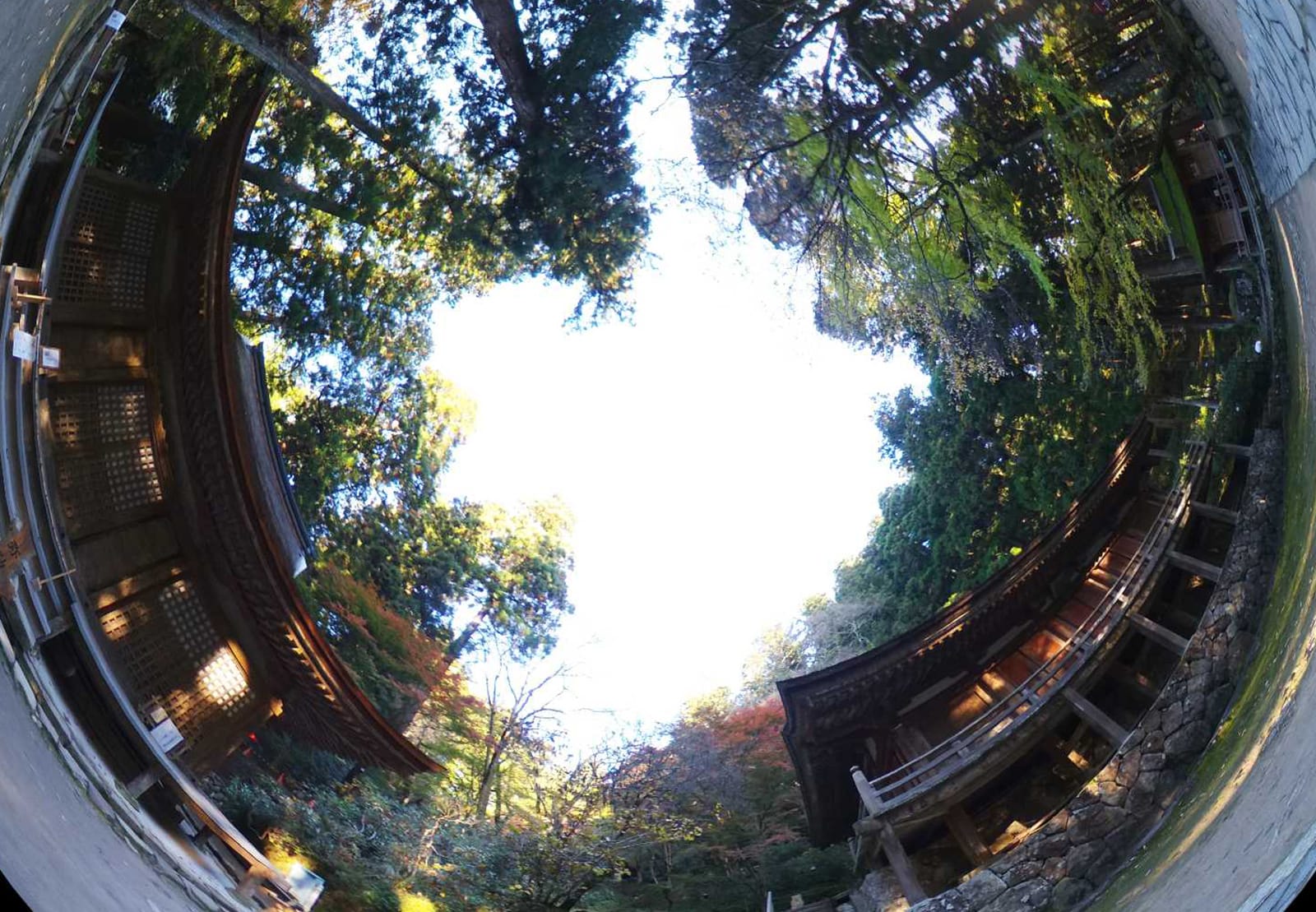 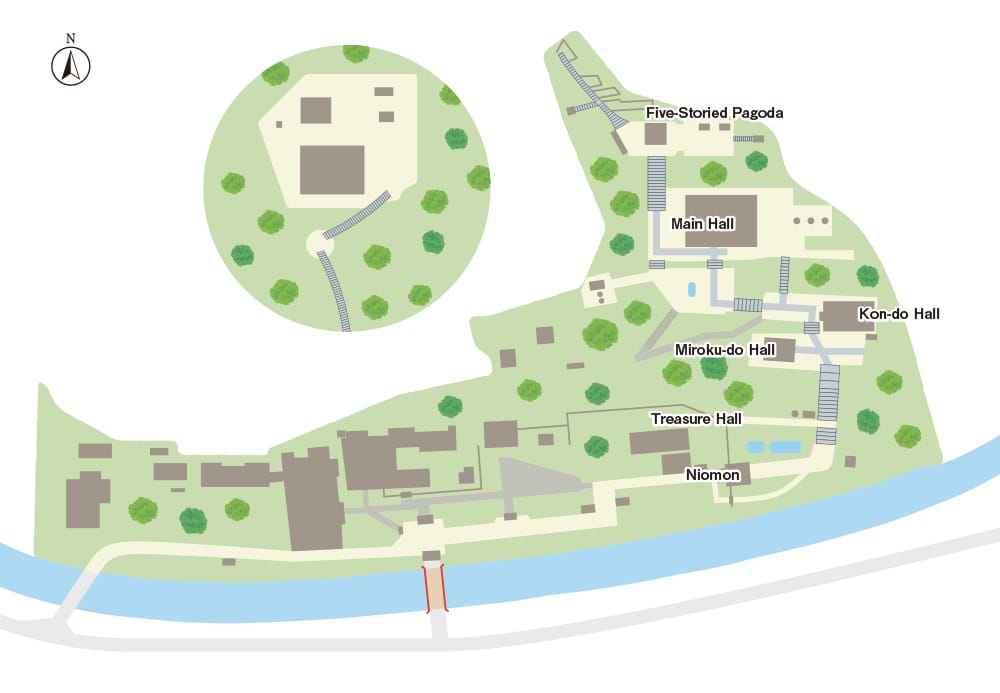