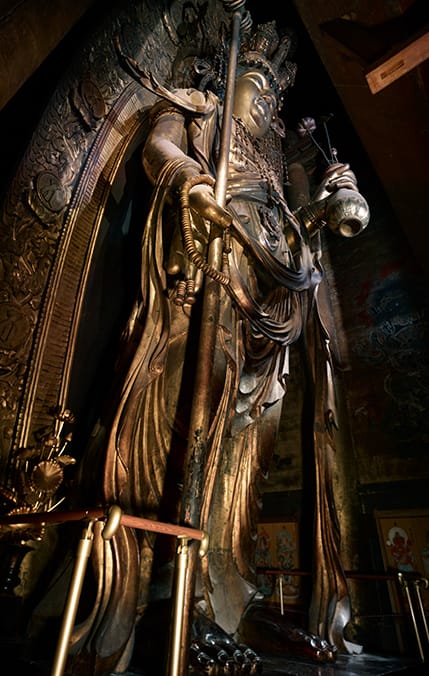 The Eleven-Headed Kannon of
Hasedera Temple

This statue of Kannon, also known as the bodhisattva of mercy, is Hasedera’s principal object of worship. At 10.18 meters, it is also one of the tallest wooden Kannon statues in Japan, and has eleven heads placed on top of its main head. The original statue upon which this image is based was carved in the eighth century from a camphor tree considered to be sacred. The statue was burned several times, but remade with a piece of the original camphor wood placed inside. This statue, created in 1538, is covered with gold leaf. This Kannon was created to bring happiness to all the people and that belief is still cherished to this day. While the main topmost head here shows a benevolent expression in line with that role, the other ten heads display a range of expressions. There are several interpretations as to why there are eleven heads, including the belief that the lower ten represent stages on the path to enlightenment, while the uppermost represents buddhahood.

In the hands of this statue are some unusual objects for a Kannon: a Buddhist rosary and priest’s staff in the right hand. Equally unusual, this Kannon stands on a square-shaped platform that is not adorned with lotus petals. This symbolizes Kannon’s existence in the everyday world and proximity to the people. The gold leaf has been rubbed off the feet by worshippers. Visitors are still allowed into the room displaying the statue twice a year, from early March to late June and from mid-October to early December.

The origin of Hasedera Temple lies in the creation of a bronze plaque in 686 by a Buddhist priest named Domyo, who dedicated it to the ailing Emperor Tenmu (631–686) in the hopes of curing his illness. In 727, at the request of Emperor Shomu (701–756), the priest Tokudo erected the Eleven-Headed Kannon statue and enlarged the temple. 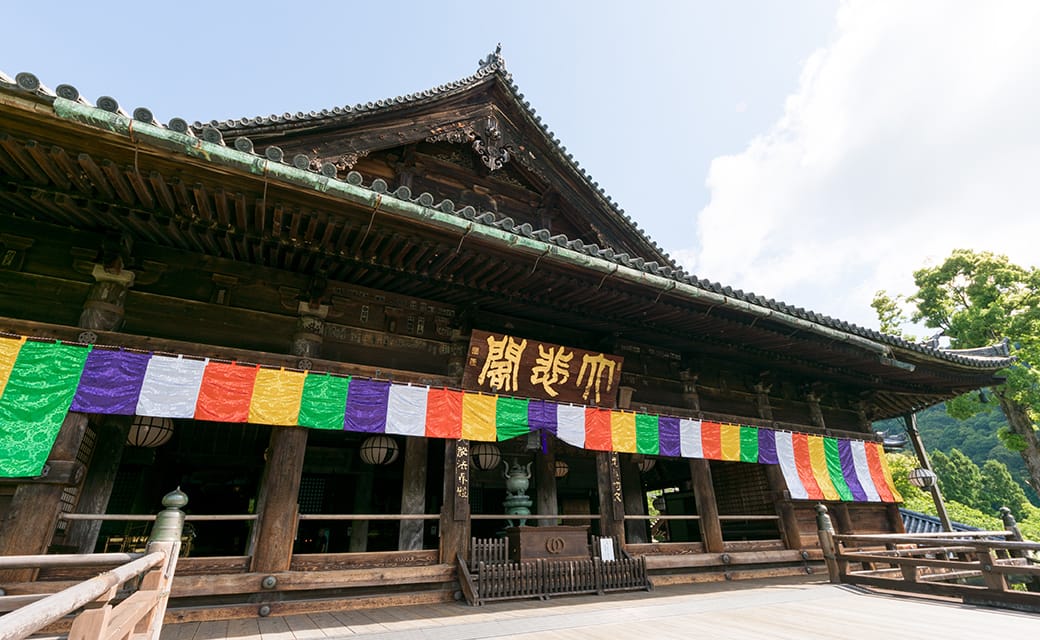 Though the temple has suffered several fires over the centuries, it has always been rebuilt and even expanded. Today, it contains several impressive architectural features, including the Niomon Gate, rebuilt in 1889 and housing two giant guardian statues; the Honbo, or head priest’s office, built entirely of cypress in 1924 and listed as an Important Cultural Property; and the Five-Story Pagoda, completed in 1954.

Hasedera is the head temple of the Buzan branch of the Shingon sect of Buddhism. Part of the Saigoku Kannon Pilgrimage of 33 Buddhist temples of western Japan, Hasedera is dedicated to the worship of Kannon, the bodhisattva of compassion.

Known as the Temple of Flowers, Hasedera is surrounded by natural beauty. From mid-April to early May, some 7,000 Chinese peonies bloom along the Covered Stairway leading to the Main Hall. Other highlights include cherry blossoms in the spring and autumn foliage on Japanese maple trees in October and November. Hasedera’s beauty has inspired countless Japanese artists and writers over the centuries. Beside the Covered Stairway is a plum tree that inspired this poem by Ki no Tsurayuki (872–945):

As the human heart’s so fickle
your feelings may have changed
but at least in my old home
the plum blossoms bloom as always
with a fragrance of the past. 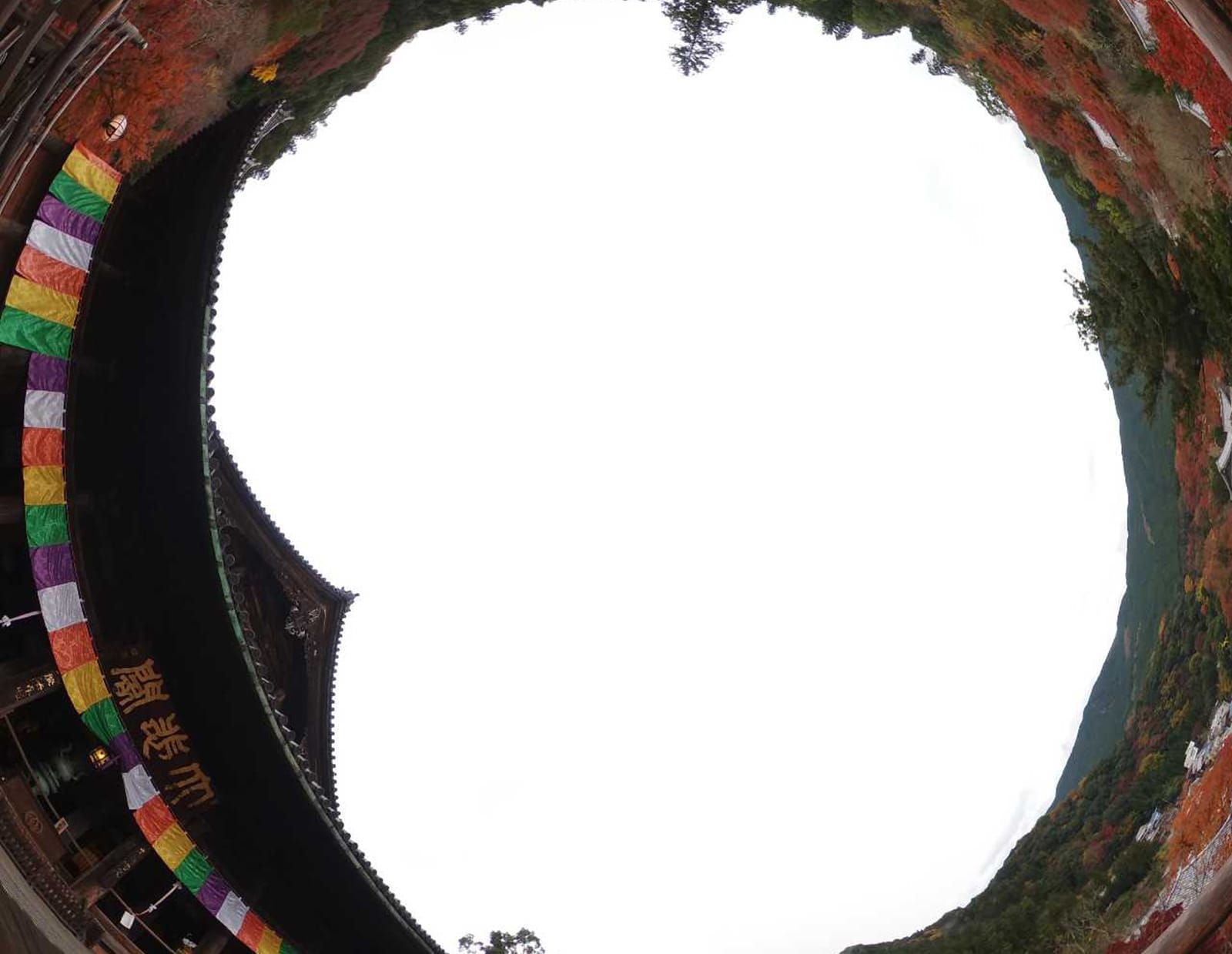 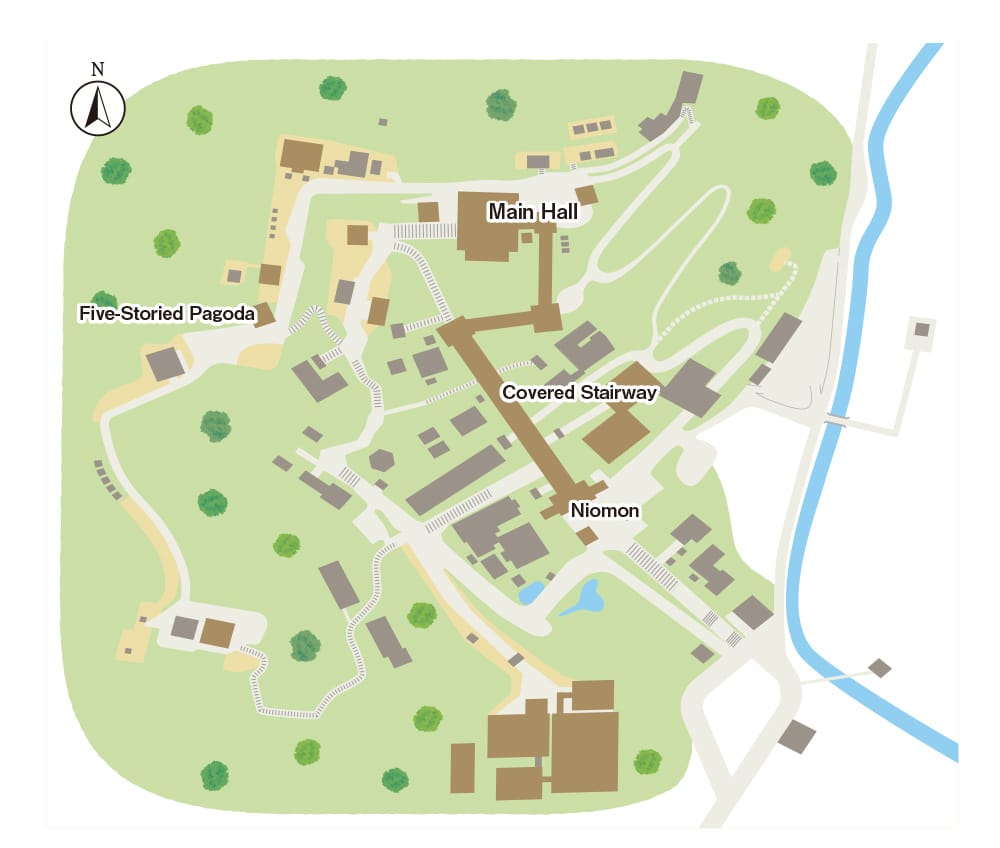